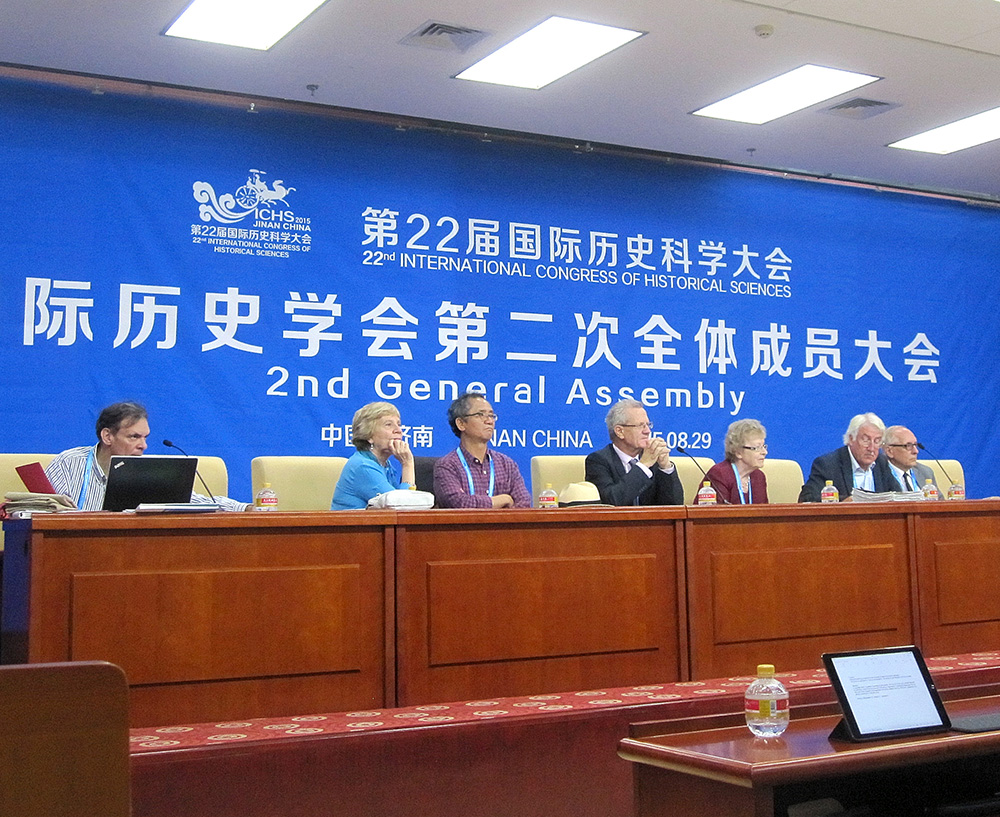 The XXII International Congress of Historical Sciences was held in Jinan on August 23-29, 2015. It was organized by the Association of Chinese Historians which officially became a National Committee of the International Committee of Historical Sciences in 1982, and by the Department of History and Culture at Shandong University. The Congress gathered 2077 participants (2765 people registered on the website), including 785 foreign scholars (from 76 countries and regions in Europe, America, Asia, Africa and Oceania). The opening ceremony was attended by Vice Premier Liu Yandong who read the Congratulatory Message from President Xi Jinping. President of the ICHS, Marjatta Hietala, delivered the opening speech, in which she reviewed the process and channels of knowledge transmission and transnational cultural communication between China and the world and pointed out the role of the ICHS in this process. She also responded to the challenges facing contemporary historians, such as competition, media, and the Internet.

The theme of the Opening Lectures was Nature and Human History. They were given by three distinguished scholars from Europe, Africa and Asia: Andrea Giardina (Italy), Mamadou Fall (Senegal) and Xia Mingfang (China) invited by the organizers.

The Congress consisted of different types of sessions: 4 Major Themes, 27 Specialised Themes, 18 Joint Sessions, and 19 Round Tables. In addition, 19 commissions affiliated by ICHS organized their own special sessions. Also 3 Evening Sessions and a Graduate-Student Poster Session were organzed. First Major Theme, China from Global Perspectives, was organized by Wang Jianlang and María Dolores Elizalde. Fourteen scientists took part in the session, expressing their views on the relationship and interaction between China and the rest of the world, the role of China, and its impact on the history of globalization since the 15th century. Second Major Theme talked about historicizing emotions. For the first time in the history of the Congress, emotional history research was designated as a major theme. The topic aroused great interest. The organizers of the panel were Ute Frevert and Andrew Lynch. Third Major Theme Revolutions in World History: Comparisons and Connections was convened and hosted by Alan Forrest, Mitani Hiroshi and Pierre Serna. Four topics were covered in four sessions: Revolutions in the Atlantic World, Revolutions in Twentieth Century Europe, Revolutions in Modern Africa and the Middle East, Revolutions in Modern East Asia. The scholars discussed revolutions in different regions. Forth Major Theme, Digital Turn in History, was organized by Tom Dublin. The first session in the morning was entitled Digital History: Challenges and Possibilities, the second, afternoon session, focused on New Tools, New Narratives, New Histories. The evening session was designed around the topic Promoting Digital History Internationally.

Subjects of the speeches given at the Congress was diverse, though for everyone global and international perspective was common. That’s what the ICHS has always encouraged, to avoid narrative too focused on national states, and instead apply global and international one. Some new subjects were represented in the program but in addition also, traditional topics or approaches (national history, regional history, political history, gender history, labor history, public history) were addressed from new perspectives of global history. Reviewing how these sessions were organized or what the papers talked about, we could make the conclusion that despite “global history” was not one of the major themes of the Jinan Congress, never have previous Congresses been characterized so much by “global approach”.