Since 1900, historians from around the world have been organizing their congresses to discuss the most pressing topics, present the results of their research and build international cooperation network. In 1926 they established the International Committee of Historical Sciences (ICHS), as a non-governmental organization composed of national committees representing the member countries and specialist commissions devoted to specific research issues. The main purpose of the Committee is to promote the historical sciences through international co-operation. The Committee was entrusted with organizing subsequent congresses every five years, in collaboration with historians of the host countries. In the past, the congress took place in Poland only once, in 1933 in Warsaw.

The General Assembly of the ICHS on August 29th, 2015 in Jinan (China) decided that the XXIII International Congress of Historical Sciences will take place in Poznań, Poland on August 23-29, 2020. Unfortunately, due to the outbreak of the COVID-19 pandemic and the unsatisfactory progress in fighting it in most countries, the organizers were forced to postpone the Congress two times. Ultimately, the ICHS Board decided that XXIII Congress will be held on August 21-27, 2022.

The Polish Local Organizing Committee was formed by the Adam Mickiewicz University in Poznań (AMU) and the Committee of Historical Sciences of the Polish Academy of Sciences (CHS PAS). It was appointed on November 5th 2015 on the basis of the agreement signed by Professor Bronisław Marcinak, then a Rector of Adam Mickiewicz University in Poznań, and Professor Krzysztof Mikulski, then President of the CHS PAS. After the change of the authorities of AMU and CHS PAS, new Chairmen of the Local Committee became Professor Andrzej Lesicki (Rector of AMU) and Professor Tomasz Schramm (President of the CHS PAS). The Committee consists of fourteen people. Besides the Chairmen mentioned above, they are representatives of the Faculty of History of AMU, CHS PAS, Polish Historical Society and Polish History Museum in Warsaw, as well as the representatives of regional and municipal authorities – Marek Woźniak, the Marshal of the Wielkopolska Region and Mariusz Wiśniewski, Vice-Mayor of the City of Poznań. The organization of the Congress was entrusted to the Executive Department, whose Chairman is Professor Krzysztof A. Makowski, and the General Secretary Professor Maciej Michalski. The members of the Executive Department represent the Faculty of History of AMU, the University’s administration, the local authorities, as well as Poznań Supercomputing and Networking Center. The Congress Bureau coordinates all activities of the Organizing Committee and the Executive Department. The logistical preparations for the Congress were entrusted to the Poznań International Fair.

The program of the XXIII Congress, in comparison to the previous ones, has been slightly modified. Several dozen different panels will be held during the Congress in Poznań. Among them, the most important will be the so-called Major Themes. In addition, a dozen so-called Joint Sessions, about 20 Round Tables, as well as several dozen specialist sessions devoted to various issues from antiquity to the present day. In addition, there will be 3 evening sessions. One and a half days were devoted to thematic panels organized by specialized committees affiliated with the ICHS.

A poster session is planned for post-graduate and PhD students. The best works will be honored with ICHS-Shandong University Young Historian Award established at the XXII International Congress in Jinan in 2015. The award was intended to encourage young scholars to participate in the Congress, where they could present their ongoing research achievements. The Shandong University and ICHS have decided to continue the Award during the XXIII International Congress of Historical Sciences in Poznań in 2022. The $US 10,000 award will be divided among five recipients.

During the Congress in Poznań, the so-called Research Forum, will be held for the first time. It is a new initiative of the Board of ICHS. The main purpose of the Research Forum is to allow research institutions to present their ongoing or planned projects to an audience of established scholars and beginner researchers. It should provide an opportunity for cooperation between institutions as well as the addition of high qualified researchers as collaborators. This initiative fully coincides with the ICHS mission, as one of its objectives is to stimulate dialogue between young scholars and various research institutions.

During the Congress in Poznań, the International CISH History Prize will be awarded for the third time. It honors a historian who has distinguished herself/himself in the field of history by her/his research, publications or teaching, and has significantly contributed to the development of historical knowledge. Also, traditionally, the Congress will be accompanied by the International Exhibition of Historical Books.

All Congress venues are located in the city center. The Congress Center, including the registration and information desks, will be located in the Zamek Culture Centre. The Opening Ceremony will be held in the biggest auditorium in Poznań, i.e. in the Earth Hall, located in the area of the Poznań International Fair. Other Congress sessions will take place mainly in the stately halls of the University. A clear system of communication between particular venues will be organized, and the walking distance between buildings will not exceed 15 minutes. All buildings are accessible for disabled people. In all Congress venues, a network called eduroam will be available.

The Congress welcomes the participation of academic staff of universities and other scientific institutions, students (B.A., M.A., Ph.D.), teachers and other persons professionally connected with the subject of the Congress.

Registration at lower price is available until April 30th, 2022. 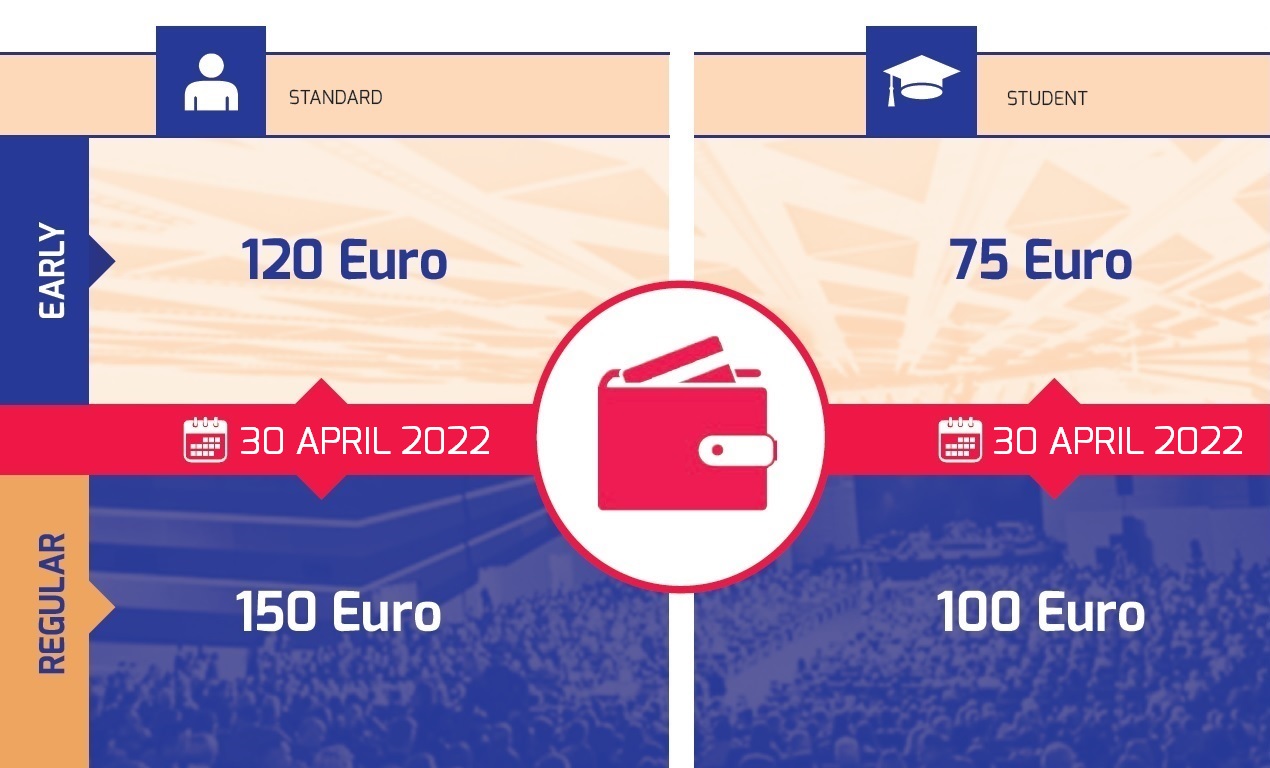 -admission to all sessions

-participation in the Opening Ceremony with welcome reception

-participation in the Closing Ceremony with farewell lunch

-cultural events of the Congress

We also offer an optional fee for accompanying persons that provides the same benefits as those of Congress participants.

SEE YOU IN POZNAŃ!