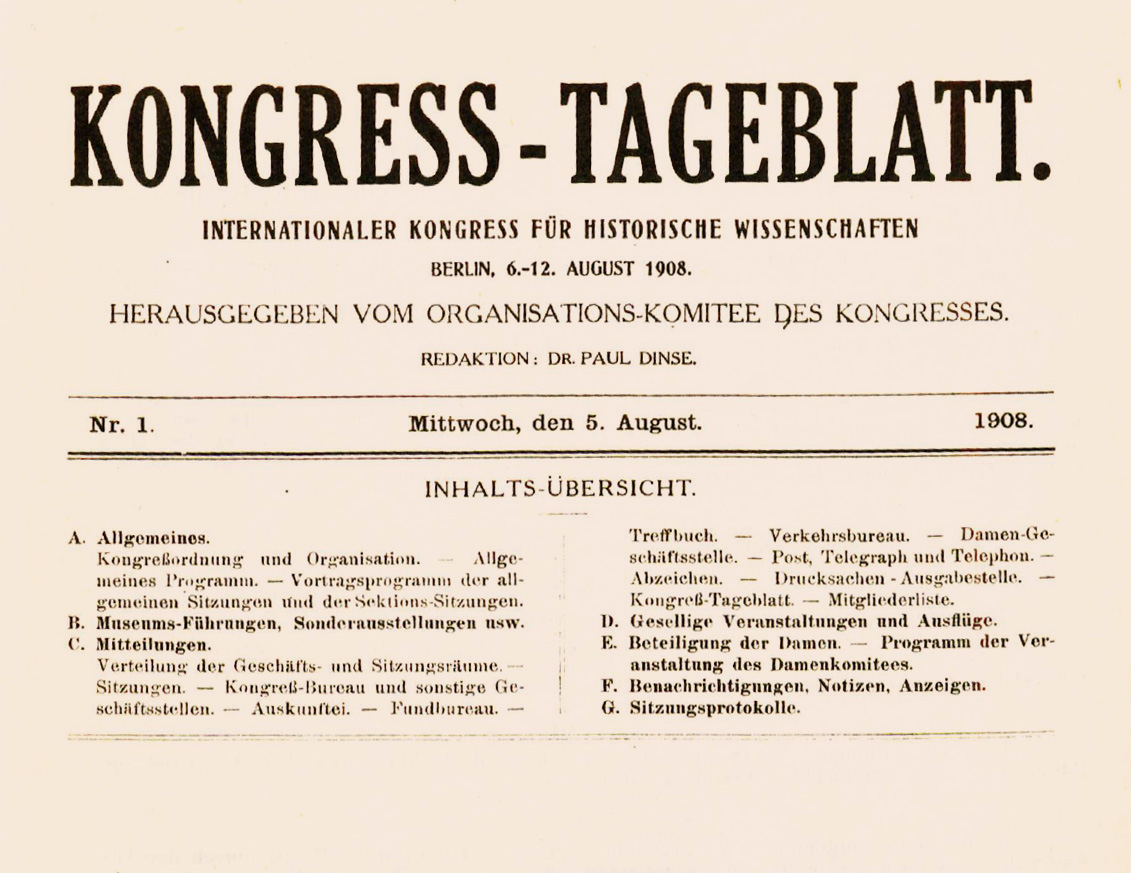 The 3rd International Congress of Historical Sciences took place in Germany’s capital Berlin on 6-12 August 1908. The organizing committee was headed by the “triumvirate”: Director General of the Royal State Archive Reinhold Koser and professors of the Royal University of Frederick William in Berlin: Eduard Mayer and Ulrich von Wilamowitz-Moellendorff.

During the opening ceremony, Reinhold Koser read out a letter from the Chancellor of the Reich Bernhard von Bülow. Addresses were delivered moreover by: Secretary of State Theobald von Bethmann–Hollweg, Mayor of Berlin Georg Reicke, Secretary of the Royal Prussian Academy of Sciences Arthur von Auwers, and President of the Royal University of Frederick William in Berlin Carl Stumpf. The keynote speech at the opening ceremony was given by the U.S. Ambassador to Germany, David Jane Hill, who presented the issue of moral obligations faced by historians in the age of historiography written from a national perspective.

As part of the thematic sections, Antiquity scholars debated, among other things, ancient Egyptian sepulchral art. Medieval experts and modernists discussed, e.g. the categorization of historical sources and their impact on research. In the Church’s history section, a debate was triggered by the problem of the beginnings of Church organization in Protestantism. Particular interest was also aroused by the lecture by Erich Marcks from the Department of History in Hamburg on the young years of Otto von Bismarck.

The general sessions focused on more cross-cutting issues, such as the periodization of art history or the history of Islam. The lecture of the Director of the Egyptian Museum in Cairo, Gaston Maspero, who presented the risks associated with the protection of ancient monuments and the measures necessary for their effective rescue, attracted a lot of interest.
The Congress participants had at their disposal an extensive printed programme of the events prepared by the hosts. Moreover, an information bulletin was published daily during the Congress; it contained brief reports on the meetings held on a given day.

A programme of accompanying events prepared for the Congress participants included visits to Berlin museums, archives and libraries, as well as tours of other cultural institutions and recreational facilities in and around Berlin. With the female participants of the Congress in mind, the organizers set up a special committee (Damenkomitee), whose task was to help organize their stay in Berlin.

During the closing ceremony, the host of the next Congress, London, was announced. Moreover, by decision of the Congress participants, at the request of the Italian delegation, a memorial plaque on the family house of Theodor Mommsen was founded.