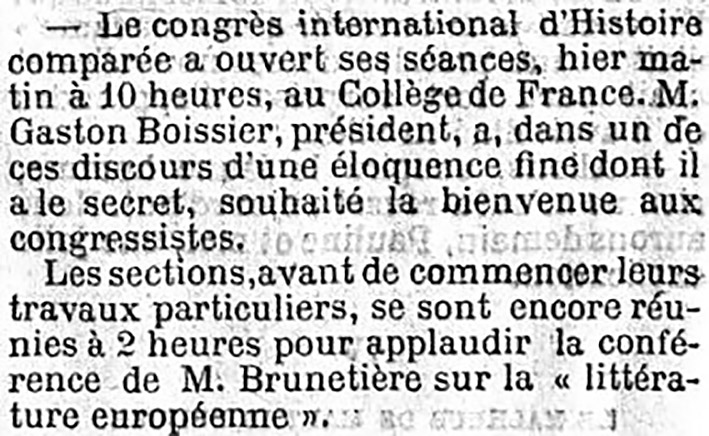 In 1900, the world lived the great Universal World Exhibition in Paris. As many as 242 scientific congresses were held on this occasion. The exhibitions organized before World War I were a great opportunity for such events. They had the idea of showing the progress of civilization, which was a result of the development and interaction of science, society and technology. The rich exhibition pavilions referred to historical styles, contrasting with technical innovations. This was the atmosphere of the first “true” Congress of historians, then still under the name of the International Congress of Comparative History.
The chairman of the Congress Bureau was Gaston Boissier, a secretary of the French Academy, who dealt with the history of ancient Rome. The chairman of the Executive Committee, in turn, was a specialist in history of diplomacy René de Maulde-La Clavière, who two years earlier was the main organizer of the International Congress of the History of Diplomacy in La Haye. This conference is considered a kind of “prologue” to the world congresses of historians. Anyway, the idea of international exchange of ideas was born just within the Society of History of Diplomacy . On the one hand, the progressing development of states and the emergence of “new nationalisms”, on the other, the existence of the phenomenon of “globalization” (mondialisation, internationalisation) was observed. Maulde-La Clavière saw world congresses as events on the border between science and politics. The art of diplomacy was considered as a tool enabling the nations to communicate with each other and therefore its historical approach was to be dominant.
The Congress of Paris was held in Collège de France from 23 to 28 of July. It was divided into 8 sections. The first was general history and the history of diplomacy. In the section 21 papers were delivered; it gathered around 300 participants. In the second section – comparative history of institutions and law – 14 papers were presented. In the third, on the history of comparative social economy, 5 papers were delivered, in the fourth, devoted to matters of religion, also 5, history of science up to 20, comparative history of literature 16, history of art and drawing 15. The eighth section – the history of music – was held as a separate International Congress (38 speeches). At the Congress almost a half of the speakers were French. In addition, the results of their research presented several representatives from Italy, Germany, Russia, Sweden, Austria-Hungary, Belgium, Switzerland, Spain, two representatives from Greece, Romania and the Vatican, and one from the United Kingdom, Luxembourg, the Netherlands, Portugal and the USA.
Henri Houssaye, a chairman of the organizing committee of the first section, said that the classical method of the historical research had been renewed. Greater emphasis has been placed on critiques of sources, and public and private archives were increasingly willing to share their collections. History was no longer written by great leaders, so the contemporary historian should have paid due attention to facts and truth, and these were in the documents. It is characteristic that not only historians but also representatives of the governments of some countries chaired this section. The papers were mainly devoted to political history, although there were also topics that probably did not match other sections.
During the meeting of second section, its chairman, Adhémar Esmain, noted that the comparative method was new also in the field of law. In this section, there were commentaries about the history of law in individual countries, but also about the issue of natural law or law in French colonies. In the third section, the leading theme were guilds , in the fourth, among others topics Roman Catholics, Greek Catholics and Protestants were compared, and in the fifth covered issues from technical sciences, through biology, geography, to medicine were raised. The sixth section, in turn, focused on the literature of European countries and its interactions, while in the seventh the papers concerned mainly Italian, French, German and Greek art. The Congress of the History of Music was divided into groups that corresponded to the epochs – Antiquity, the Middle Ages and Modern Times.
The Congress in Paris gave a chance to speak about their own history to historians from smaller countries, sometimes treated marginally. This was assessed by later historians as a symbol and sign of the coming out of these countries from under shadow of great powers. The outcome of the Congress was the seven-volume publication of the papers publishing house (not all papers were included). Moreover, the new journal “Revue de synthèse historique” appeared, which was founded by Henri Berr, who invited to international and interdisciplinary cooperation.