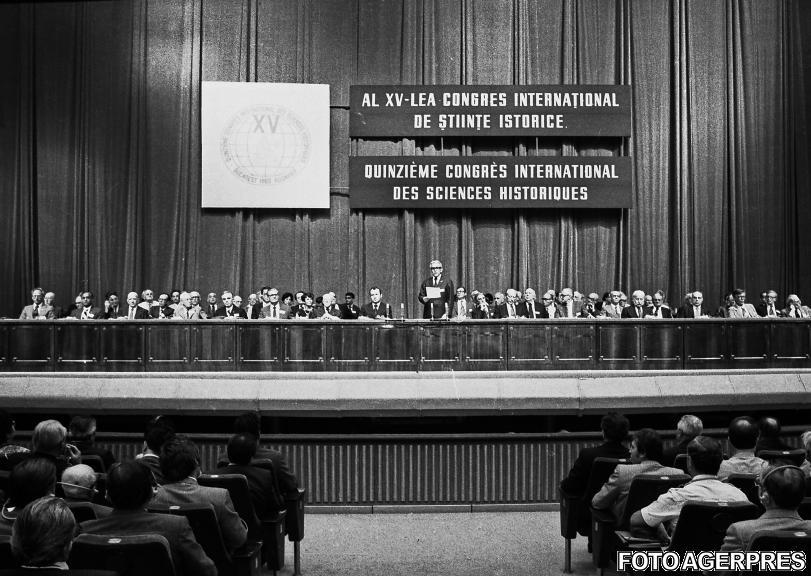 On August 10-17, 1980 in the Romanian capital, Bucharest, XV International Congress of Historical Sciences took place. At the head of the Organizing Committee was the chairman of the Romanian Academy of Social and Political Sciences Mihnea Gheorghiu.

Over 2,400 historians from 67 countries took part in the Congress. The largest number of participants came from Romania (648), the United States (141), the USSR (116), Japan (108), Bulgaria (106) and France (100). Numerous were also delegations from German Democratic Republic (98), Spain (94), Federal Republic of Germany (90), Hungary (89) and Poland (75).
During the opening ceremony a letter sent by the Romanian President Nicolae Ceauşescu was read out. Vladimir Stepanek, a representative of UNESCO, also took the floor. The lectures at the opening ceremony were delivered by Karl Dietrich Erdmann, president of the International Committee of Historical Sciences, who spoke about the ecumenical community of historians, and Ştefan Pascu, chairman of the National Committee of Romanian Historians, who presented the genesis of Romance nations.

The program of the Congress consisted of 144 sessions divided into three thematic groups: 4 so-called Major Themes, 4 methodological panels and 4 chronological sections. First of the Major Themes was devoted to Eastern Europe as an area of the encounter of civilizations, the second concerned the problem of peace and its forms over the centuries, the third federalist and pluralistic countries, and the fourth the place of women in society.

Methodological sessions concerned the issue of the language of historical narrative, the significance and role of historical education, the problems and methods of oral history, as well as the questions of demography, epidemics and ecology.

The chronological sections were divided into antiquity, the Middle Ages, modern times and contemporary history. Historians of ancient times and medievalists first of all discussed about East-West relations, civilizations and societies, as well as social and economic changes. With regard to the modern era, three problems were stressed: relations between continents and nations, relations between ideas and societies, and the economy. The section of current history focused on four subjects: international relations, relations between domestic politics and economy, societies, as well as work and management in industry in the 20th century.