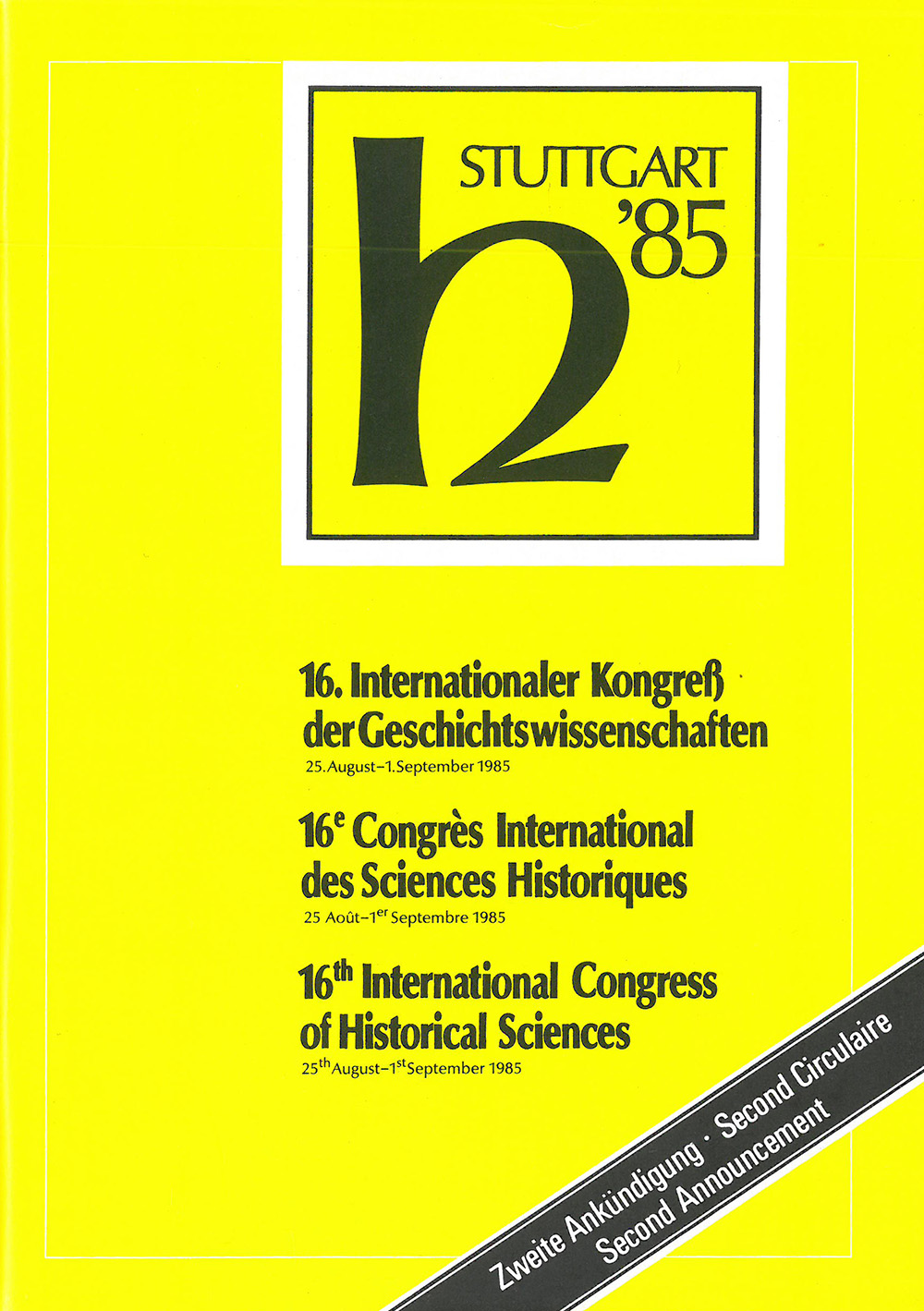 Stuttgart hosted the 16th International Congress of Historical Sciences between 25 August and 1 September 1985. The Organising Committee was headed by the Chairman of the German Association of Historians Christian Meier.

Addresses during the opening ceremony were delivered by: President of the Federal Republic of Germany Richard von Weizsäcker and Lord Mayor of Stuttgart Manfred Rommel. The keynote speaker was Aleksander Gieysztor, President of the International Committee of the Historical Sciences.

The Congress agenda included 3 so-called major themes, 3 methodology panels, 4 chronological sections, and “round table” debates. The first major topic was dedicated to the Indian Ocean as a geographic and historical area and its impact on the countries of Asia and Africa. Another one was related to the Other and the related questions of otherness, identity and discrimination, while the third one highlighted resistance against fascism, Nazism, and Japanese militarism by 1945 in the context of opposing one’s own governments and collaborating with the oppressor.

The methodology sessions related to Max Weber’s views on the methodology of history, relations between archaeology and history and the significance of film as a historical source. The chronological sections were divided into antiquity, the Middle Ages, modernity, and contemporary times. In relation to the antiquity, the emphasis was placed on the cultural role of the city and the relations between the state and religion. Antiquity experts and medievalists discussed together the role of geographical barriers in history. In addition, the medieval section focused on the issue of popular and religious movements and the relationship between political regimes and authorities. Modernity specialists dealt with: religious reforms in 16th-century Europe, absolute monarchy in Europe and Asia, parliaments and political parties until 1914, the role of religion in Africa, relations of “small states” to cultural, political and economic transformations in 1750-1914 and relations of elite culture to mass culture from the 18th century onwards (together with specialists in recent history). The participants in the section on modernity also discussed six other thematic areas: the new dimension of diplomacy since 1914, employment and unemployment after Keynes, the effects of the development of the automotive industry, relations between citizens and public administration, social change in developing countries and relations between political parties, public opinion and national security. The “Round Tables” were devoted, among others, to the problems of historical sources (publication of 19th and 20th century sources and historical magazines), the image of Asia in modern European thought, and the role of the family in history. In addition, a meeting was held dedicated to the question of historians and the problem of peacekeeping. It ended with an appeal to nations and governments for peace and the cessation of nuclear tests.

New board members of the International Committee of Historical Sciences were elected during the Congress. The outgoing President Aleksander Gieysztor was replaced by Ernesto de la Torre Villar from Mexico.

The Stuttgart Congress bore fruit with numerous publications – collections of papers and special volumes of journals issued by some national committees.