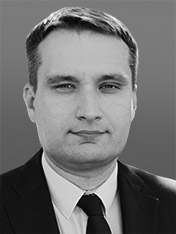 Mariusz Wiśniewski
The First Vice-President of the City of Poznan

He graduated from Adam Mickiewicz University in Poznan, where he studied law and political science. In the years 2006-2014 he was a councillor of the City of Poznan. He also worked as a sports journalist (1998-2000), chairman of the Independent Students’ Association (2001-2003), advisor to the Voivode of the Wielkopolska region (2008-2014), academic teacher (2012-2014), vice-president of Wielkopolska Regional Development and Promotion Fund (2014). In the period from 2008-2014 he was on the team of advisors to Piotr Florek, the Voivode of the Wielkopolska Region. He was engaged in organizing the 2008 United Nations Climate Change Conference and meetings related to the Polish Presidency in the EU which took place in Poznan in 2011. From 2003 to 2006 he worked in the Poznan City Council, where he was responsible for organizing and coordinating the student internship programme.