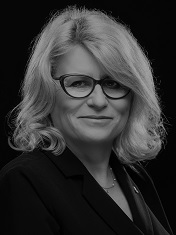 She is the author or co-author of nearly 100 scholarly works – books and articles. Her research focuses on 20th-century literature; she engages in literary criticism too. She is also a translator of English-language prose, particularly children’s prose, which is her great passion. In 1995 she obtained a doctorate, in 2001 – a postdoctoral degree, and in 2015 – the title of professor of humanities.