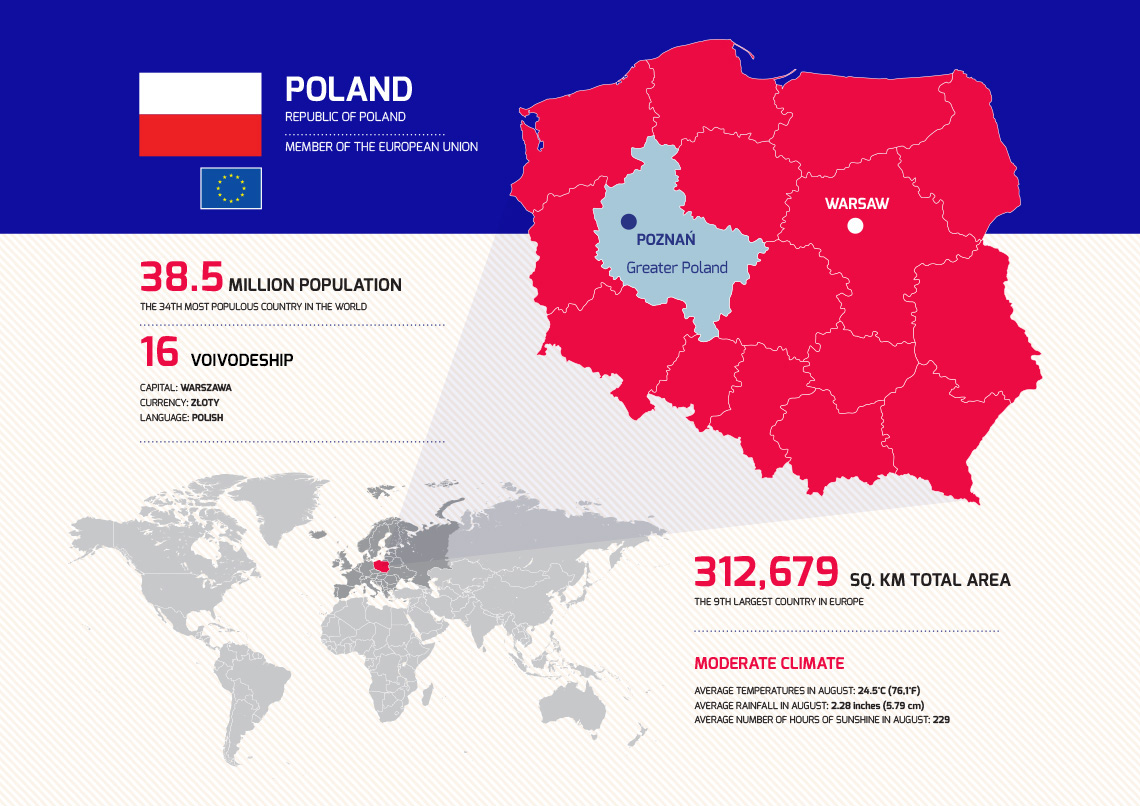 Poland is a European country with a rich history and culture. The establishment of the Polish state can be traced back to the 10th century. Poland, being part of the Latin West, actively participated in its cultural development, drawing experience from its location between the Slavonic and Germanic world, as well as Western and Eastern Christianity. In the past the country was characterised by the tradition of the unique nobles’ democracy and religious tolerance, as well as the tradition of persistent struggle for independence (especially after losing it at the end of the 18th century).

Poznań is the capital of the Wielkopolska Region. It is conveniently located at the crossroads of the routes connecting Moscow with Berlin, Paris and Madrid, as well as those connecting Budapest and Prague with the Baltic coast and further with the Scandinavian Peninsula. The city is inhabited by over half a million well-organised, industrious and hospitable people.

The region, which later became known as Wielkopolska, was the cradle of the Polish statehood. Poznań, together with the cities of Gniezno and Kalisz, played a significant role in the development of the region and the whole country. Since, from its very beginnings, Wielkopolska was under the influence of Western Europe, in later periods, it was always in the lead (socially, politically, economically or culturally).

Over time, a specific ethos of the region’s inhabitants emerged – it was particularly visible in the 19th and the 20th century. But still today, the inhabitants of the region are known for their excellent organization skills, rationality, reliability and thriftiness. The economic potential of Poznań itself is its great asset. Indeed, the city is characterized by a stable economic situation, entrepreneurial growth and, above all, by developing human capital.

Each year Poznań hosts important cultural and scientific events – the most important of them being:

Every year a few dozen international conferences and events are organized  on the centrally located fairgrounds of Poznań International Fair (www.mtp.pl).